Rice flour (also rice powder) is a form of flour made from finely milled rice. Rice flour is used as a thickening agent in recipes that are refrigerated or frozen since it inhibits liquid separation. It is also very popular for the preparation of a variety of Asian noodles.

Rice flour is made from ground raw rice and is used to make rice noodles and some pancakes, such as South Indian appams. It can be used to thicken soups and stews, as well as providing an alternative to wheat flour in cakes and biscuits. However, it’s gluten-free so can’t be used to make yeasted loaves of bread.

White rice flour is characterized by a high starch content of ±78 %, and contains a fair amount of hypo-allergenic protein. Thanks to the ease of digestion of both rice starch and rice protein, and the very interesting amino acid profile of the latter – being much the same as the amino acid profile of breast milk – rice flour is widely used in baby food like infant cereals.

A type of flour produced from grinding polished rice (the bran and germ have been removed) into a powder. White rice flour can be used as a thickening agent for sauces and puddings. It is also very popular for the preparation of a variety of Asian noodles. It is used in some baked goods, such as cakes, cookies, and dumplings, but because the flour contains no gluten, it is not suitable for baking yeast breads. It must be combined with wheat flour in order to attain the properties of gluten formation necessary for yeast dough to properly rise.
White rice flour contains high levels of protein, but it contains much less vitamins, minerals, and fiber than brown rice because of the removal of the bran and germ. Since white rice flour contains no gluten, it is a suitable substitution for wheat flour for people who cannot tolerate gluten in their diets because of a severe allergic reaction (celiac disease).

Be the first to review “Rice Flour – Heera” Cancel reply 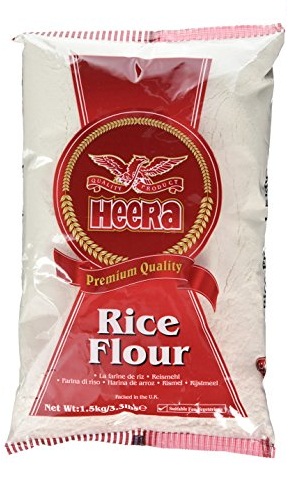