White pepper is the result of a process which includes the elimination of the outer shell of a mature peppercorn, giving this pepper a more refined flavour and a more discreet appearance for delicate sauces.

Black and white peppercorns are both the fruit of the pepper plant, but they are processed differently. Black peppercorns are picked when almost ripe and sun-dried, turning the outer layer black. To produce white peppercorns, this outer layer is removed before or after drying, leaving only the inner seed. White pepper tastes hotter than black but is less complex, with fewer flavour notes. Heera white pepper is mainly used in light-coloured dishes for aesthetic reasons (such as white sauces and mashed potatoes) and in some cuisines for its specific flavour.

It was once considered to be quite valuable, leading it to be frequently referred to as the “king of spices.” White pepper is of the same variety as traditional black pepper; however white pepper berries have been allowed to fully ripen on the vine. The peppercorns are then soaked to remove the outer hulls. This spice is characterized by a flavour that is slightly more delicate and less pungent than black pepper. It is perfect for use in recipes where dark specks are not desired. Although more commonly used in ground form, the whole peppercorns maintain their flavour much longer and can be ground as needed with a mill or spice grinder. This way, you get the long-lasting freshness as well as greater versatility in use.

Common Uses:
Commonly used in creamed soups, chowders, and stews
Great for adding to white sauces such as alfredo, Mornay, crème sauce, and other béchamel sauces
Add some zest to mashed potatoes, cauliflower, eggs, and other lightly colored dishes
Commonly found in Chinese and Vietnamese cuisine to make many hot & sour soups
Popular for seasoning meat, poultry, and fish for unforgettable flavour 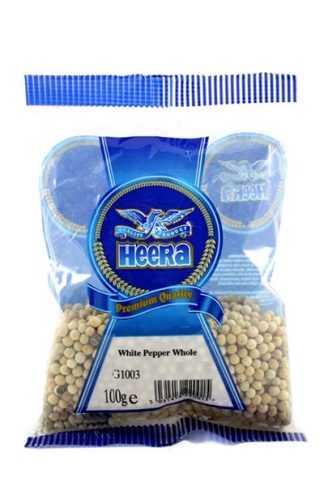