Pillsbury Chakki Fresh Atta is 100 percent whole wheat grain atta with fibre – which is important for a healthy digestive system – natural ingredient for overall health and vitality, plus iron, which acts as a carrier of oxygen in the body. It provides consumers with a deliciously soft rotis.

Atta is an Indian wheat flour used to make most South Asian flatbreads, such as chapati, roti, naan and puri. Most atta is milled from hard wheat varieties, also known as durum wheat, that comprise 90% of the Indian wheat crop, and is more precisely called durum atta.
Hard wheats have a high gluten content, which provides elasticity, so doughs made out of atta flour are strong and can be rolled out very thin

In India and Pakistan wheat products like ‘wheat powder’ or ‘wheat flour’, ‘atta flour’, ‘maida flour’ and ‘sooji’ (semolina, also known as ‘rava’) are available in the market. There is technical difference between maida flour and sooji flour in terms of bran content; maida has negligible bran content. Maida flour is used mainly for making bhaturas and naan, types of Indian breads similar to roti or chapati, while sooji is used mainly in the preparation of a delight “halwa”. 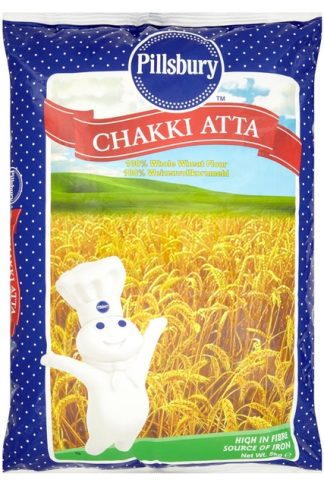